INTRODUCTION: The epidemiology of amyloidosis is not well known and its diagnosis is difficult, due to unspecific early clinical manifestations. Amyloidosis is considered when organ failure occurs. Renal, cardiac and hepatic involvement usually occurred despite therapy. Presenting this case report, we aimed to underline the need of new treatments for amyloidosis.

MATERIALS AND METHODS: We describe a 41 years old woman admitted to the hospital with proteinuria (1280 mg/24h) and rapid deterioration of renal function (serum creatinine from 0.8 to 1.6 mg/dL). Autoantibodies, immunoglobulin and C3/C4 were negative. A renal biopsy showed the presence of AL-Amyloidosis with k-light chains deposition at immunofluorence. Subsequently, the patient showed nephrotic syndrome onset (proteinuria 4000 mg/24h with albuminuria 3400 mg/24h) and increased rates of cholestasis with hepatomegaly and hepatic failure.

RESULTS: Treatment with bortezomib and dexamethasone gave a complete hematological response but renal function was not improved.

DISCUSSION: This case is very interesting because renal involvement was the initial presentation of amyloidosis and rapid progressive renal and hepatic failure was subsequentely observed; its management was challenging from the clinical approach to the final diagnosis and treatment.

CONCLUSIONS: In terms of organ response, it is necessary to develop new strategies to counteract the progressive organ failure due to amyloid deposition.

Amyloidosis is a rare disease with higher prevalence in adult males; its diagnosis is difficult because of the absence of early manifestations and specific signs. Disease includes a heterogeneous group of pathological features characterized by the extracellular deposition of fibrillar proteinaceous material in various tissues and organs in particular renal glomeruli with an estimated prevalence ranging from 2.7% to 4% of renal biopsies 1. The marked selective proteinuria (albuminuria), usually reported, reflects the main glomerular deposition that characterizes this kind of damage. Amyloidosis is defined light chain amyloidosis (AL) when the protein fibrils derived from the variable region of the light chain, usually lambda chains deposits 2 , 3.  The most common manifestations of AL-amyloidosis are related to the involvement of kidney, heart and liver 4. The symptoms depend on the organs affected by the accumulation of amyloid.

The goal of treatment is eradication of the monoclonal plasma cell population and suppression of the pathologic light chains, which can result in organ improvement and extend patient survival. Standard treatment approaches include oral melphalan and prednisone, even if only a quarter of patients achieved a hematologic response to this treatment and the median survival was only 12-18 months 5. In fact a progressive glomerular filtration rate (GFR) reduction with cardiac involvement and increased in liver size usually occurred despite therapy. In this context, high dose melphalan (HDM) followed by autologous hematopoietic stem cell transplantation (SCT) has shown to be effective in reducing clonal disease and circulating light chains improving kidney function in AL-amiloidosis nephropathy 6 and is not associated to the numerous side effects related to chemotherapy. Recently, therapeutic strategies may include novel agents such as immunomodulatory drugs or proteasome inhibitors, in particular bortezomib, in patients not eligible for SCT. 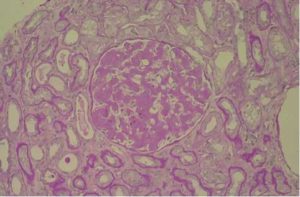 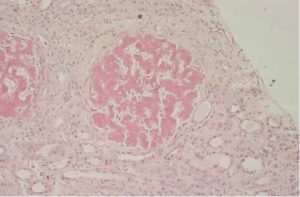 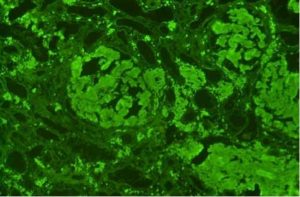 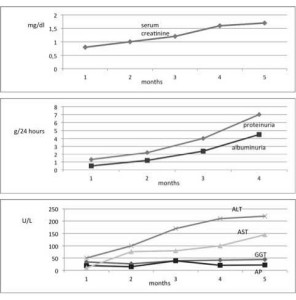 The patient was treated with bortezomib 1.3 mg/m2 biweekly associated with dexamethasone. The treatment led to a mild clinical improvement and rapid hematological response (1 month) with good tolerance of therapy.  Complete hematological response was defined on the basis on the International Society for Amyloidosis criteria as negative serum and urine immunofixation electrophoresis, normal serum free light chain ratio and < 5% clonal plasma cells on bone marrow studies 8. However, patient showed a sustained worsening of renal function with a progressive GFR reduction until 20 ml/min; therefore she has been referred to a predyalisis satellite unit.

The epidemiology of AL-amyloidosis is not well known because it is a rare entity difficult to recognize, due to the unspecific early clinical manifestations of the disease. The hypothesis of AL-amyloidosis is only considered when specific organ failure occurs. Clinical/organ involvement were defined by the consensus report from the 10th International Symposium on Amyloid and Amyloidosis as demonstration by biopsy of affected organ or biopsy at an alternate site to confirm the histologic diagnosis of amyloidosis: fine-needle abdominal fat aspirate and/or biopsy of the minor salivary glands, rectum, or gingiva 9. In our case the unusual nephrologic onset consisting of hypertension and nephrotic proteinuria in young woman after pregnancy imposed the renal biopsy that finally defined the diagnosis of AL-amyloidosis. Renal biopsy demonstrated the amyloid glomerular deposition consists of kappa light chains, while lambda light chains are observed more frequently. The marked selective proteinuria, mainly represented by albumin (about 80%), expresses the main glomerular damage typical of fibrillar amyloid deposition 10. Moreover a rapid progressive renal and hepatic failure was simultaneously observed, and renal amyloid deposition was restricted to the glomeruli, whereas myocardium was not involved initially.

Subsequently cardiac involvement occurred despite therapy and cardiac biomarkers were increased. In fact, several studies suggest that Troponin I or T provide a quantitative assessment of cardiac damage and are independently associated with survival 11. Moreover B-type natriuretic peptide (BNP) and/or NT-proBNP can be useful to recognize cardiomyocyte stress earlier than cardiac ultrasonography. Patients with cardiac involvement have a mean survival of 1.1 years after diagnosis, and a survival less than 6 months if treatment is not provided once the first symptoms of hearth failure are recognized 12 , 13 , 14 especially if the signs of heart failure persist when the diagnosis is confirmed.

The goal of treatment is the eradication of the monoclonal plasma cell population and suppression of the pathologic light chains that can result in organ improvement and extend patient survival. This clone of plasma cells is the source of the amyloidogenic light chains, histologically identical to those seen in the more common plasma cell dyscrasia, multiple myeloma. Given these similarities, treatments for AL-amyloidosis have been largely derived from those studied for the treatment of multiple myeloma 16 , 17. The efficacy of a treatment can be measured both in terms of reduction in the burden of clonal plasma cell disease (hematologic response) and by improvement in the organ function (organ response) 18. The first effective treatment for AL-amyloidosis was HDM and prednisone. However, only a quarter of patients achieved a hematologic response to this treatment and the median survival was only 12-18 months 19. High-dose melphalan followed by autologous stem cell transplantation (HDM/SCT) was explored in AL-amyloidosis based on its success in treating multiple myeloma. Two large studies from experienced centers confirmed the utility of HDM/SCT as a treatment for AL-amyloidosis. At Boston University, 312 patients with AL amyloidosis were treated with HDM/SCT at 200 mg/m2 or 140 mg/m2 based on age and cardiac status. Utilizing a multidisciplinary team for peri-transplant management, mortality related to treatment was reduced to 14% in these selected patients 20. In this series, the median survival for those who achieved complete response was more than 10 years compared to 50 months for those who did not achieve complete response 21. A second large patient series from the Mayo Clinic reported 434 patients with AL-amyloidosis treated with HDM/SCT over 14 years. A hematologic response was seen in 76% of patients including 39% who achieved complete response. Treatment related mortality was 10% 22.

Despite the reported efficacy, the use of HDM/SCT in AL-amyloidosis remains controversial. In fact only 20-25% of patients with AL-amyloidosis are eligible for such aggressive treatment 23. Strategies for those not eligible for transplantation include novel agents such as proteasome inhibitors. Targeting the proteasome, the cellular machinery largely responsible for protein homeostasis was rational based on the misfolded nature of proteins in AL-amyloidosis. In our case the patient was treated with dexamethasone and bortezomib, a reversible inhibitor of the 26S proteasome, with a complete hematological response and good tolerance of the treatment 24. However, in terms of organ response our patient showed a sustained and rapid worsening of renal function despite therapy and a progressive GFR reduction until 20 ml/min.

Treatment with bortezomib and steroids can be an effective approach for AL-amyloidosis in order to reduce clonal plasma cell and give a complete hematological response. However, new approaches have to be developed in order to also improve organ response targeting amyloid deposit and harnessing the immune system.