INTRODUCTION: Despite improvement of the functional results of islet transplantation, some attrition of graft function is still observed over the years. The reason is undefined to date but is likely to be multifactorial, one factor being the adverse effects of immunosuppressive agents. In this study, we examined the effects of various immunosuppressive drugs used in clinical islet transplantation on beta cell replication in vitro.

MATERIALS AND METHODS: Islets isolated from rat pancreas were dispersed into single cells and plated on extracellular matrix. Cells were incubated in the presence of 10 microM Ethinyl deoxyUridine (EdU), with or without cyclosporine A (CsA), tacrolimus and mycophenolic acid (MPA). Dose-response and time-dependence curves were determined for each drug. Cells were labelled bydouble immunofluorescence for PDX1 and EdU, and the rate of replication expressed as the percentage of EdU positive beta cells.

Islet transplantation has become a well-accepted therapy for patients with type 1 diabetes 1 , 2. Key elements for this success include sufficient transplanted islet cell mass and adapted immunosuppressive protocols. The Edmonton protocol and its more recent variants require lifelong immunosuppression to prevent islet graft rejection 3 , 4. These protocols use a glucocorticoid-free combination of immunosuppressive drugs typically including T-cell targeting induction, and a combination of calcineurin inhibitors, mTOR inhibitors or anti-metabolites. With the original Edmonton immunosuppressive regimen, associating daclizumab, sirolimus and tacrolimus, only 20% of patients have remained insulin-independent three years after islet transplantation 5. More efficient immunosuppressive protocols have allowed a marked improvement of clinical outcomes 6 , 7, indicating that immune mechanisms were partly responsible for progressive graft dysfunction. However, functional attrition of islet grafts is still observed and additional mechanisms may be, at least in part, the result of adverse effects of immunosuppressive agents.

Tacrolimus (FK506) is a hydrophobic macrocyclic lactone, and, as cyclosporine A (CsA) inhibits calcineurin (phosphoprotein phosphatase-2B) activity and suppresses interleukin (IL)-2 transcription and T-cell proliferation 8. Combination of these immunosuppressive agents provides great immunologic protection without severe diabetogenic side effects in the short term 9. Other immunosuppressive drugs, such as mycophenolate mofetil (MMF) are increasingly utilized in islet transplantation. In a report, MMF was designed as the ideal immunosuppressive agent from a pancreatici beta cell point of view 10. Mycophenolate mofetil is a prodrug of mycophenolic acid (MPA) that was developed to improve the bioavailability of MPA. After oral administration, MMF is completely metabolized to MPA. MPA is a reversible inhibitor of inosine monophosphate dehydrogenase (IMPDH), which blocks lymphocyte proliferation 11.

Several studies have investigated the effects of these immunosuppressive agents on beta cell function and viability in cell lines, rodent and human islets 12 , 13 , 14 , 15. High doses of tacrolimus caused an acute insulin release 16 and inhibition of insulin secretion upon stimulation by glucose 17. MPA reduces insulin secretion by inhibiting voltage-dependent calcium channels 18.

Evidence indicates that beta cells in adult mammals are normally derived and replenished through self-replication 19 , 20. To achieve homeostasis in conditions of changing insulin demand, the ability of beta cells to up-or down-regulate their mass using mechanisms of beta-cell replication, neogenesis, apoptotic cell death, and changes in beta cellsize has also been demonstrated 21 , 22. Therefore beta cell replication is thought to play a quantitatively significant role in maintaining pancreatic beta cell mass and function, and the endocrine pancreas should be considered as a slowly regenerating tissue 23.

Abundant, and sometimes contradictory, literature is available on the effects of sirolimus on beta-cell function, viability and proliferation 24. We have already published an in-depth analysis on the dose- and time-dependence of sirolimus on beta cell proliferation 25. Despite the considerable interest for the effect of these drugs on islet function and viability, little is known about the effect of tacrolimus, CsA and MPA on beta cell replication. In this study, we have investigated in vitro the impact of immunosuppressive drugs on rat beta-cell proliferation.

Male Sprague-Dawley rats (200-225 g) were purchased from Janvier (Le Genest-St-Isle, France). Animals were kept in our animal facility with unrestricted access to food and water. All experiments were conducted under protocols reviewed and approved by our institutional animal care and use committee.

After cell recovery, islet cells were re-suspended at a density of 4 x 105 cells/ml in control DMEM. Aliquots (50 µl) of this suspension were plated as droplets at the center of Petri dishes coatedwith 804G-ECM as previously described 27 and were incubated at 37°C. One day later, cells were incubated with 10 mM 5-ethynyl-2’-deoxyuridine (EdU) under control conditions or in continuous presence of the immunosuppressive drugs at the indicated concentrations and times. The inhibitors were dissolved in DMSO, which was added at the same concentration to control cultured cells.

Terminal deoxynucleotide transferase mediated dUTP nick-end labeling (TUNEL) staining on fixed cells or on tissue sections were performed with the In Situ Cell Death Detection Kit (Roche, Rotkeuz, Switzerland) following manufacturer’s instructions. Cells were stained for 20 min at 37°C with 1 μg/ml Hoechst 33342 and the number of TUNEL positive cells was expressed relative to the number of Hoechst positive cells.

The quantification of mono- and oligonucleosomes present in the cytoplasm of apoptotic cells was performed by enzyme-linked immunosorbent assay (ELISA) using the cell death detection ELISAPLUS kit according to the manufacturer’s instructions (Roche, Rotkeuz, Switzerland).

Presentation of Data and Statistical Analysis

Unless statedotherwise, data are presented as mean ± SE for “n” independent experiments, and levels of significance for differences between means were assessed either by Student’s t test or ANOVA with Dunnett post hoc analysis wherever applicable. Differences between groups were considered statistically significant at p < 0.05. 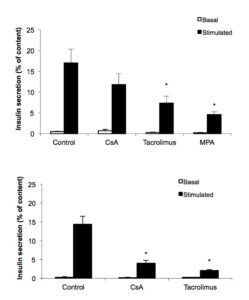 Figure 1. Immunosuppressive drugs decrease glucose-stimulated insulin secretion. Rat islet cells were attached on culture dishes during 24h. Then, cells were exposed or not to the indicated immunosuppressive drugs (200 ng/ml CsA; 10 ng/ml tacrolimus and 5 μg/ml MPA). After 2 days (A) or 5 days (B), insulin secretion was assessed in response to 2.8 mM glucose (open bars) and 16.7 mM glucose (filled bars). Mean ± SEM, n=3-5; *p < 0.05 vs. control.

Immunosuppressive Drugs Did Not Induced Apoptosis 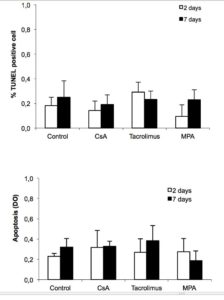 Figure 2. Immunosuppressive drugs do not affect beta cell survival. Rat islet cells were attached on culture dishes during 24h. Then, cells were exposed or not to the indicated immunosuppressive drugs (200 ng/ml CsA; 10 ng/ml tacrolimus and 5 μg/ml MPA). After 2 or 7 days, apoptosis was determined by TUNEL immunofluorescence (A) or in total islet cells by Cell Death detection ELISA (B). Mean ± SEM, n=3-5; *p < 0.05 vs. control.

To study the impact of immunosuppressive drugs on beta cell replication, rat islet cells were incubated with EdU in the presence or absence of CsA, tacrolimus or MPA. Cell replication was determined by EdU incorporation and beta-cells identified by PDX1 immunofluorescence. After 1, 2 and 5 days of culture in the presence of EdU and absence of immunosuppressive drugs, 5, 13 and 28% of beta-cells were EdU positive, respectively (Figure 3 Aa and B). When cells were incubated with MPA (5 mg/ml), CsA (200 ng/ml) or tacrolimus (10 ng/ml), fewer EdU positive cells were observed compared to control conditions (Figure 3 Ad, b, c and a respectively). Tacrolimus and CsA significantly reduced beta cell replication compared to control after 5 days and not after 1 and 2 days expositions (Figure 3 B). By contrast, MPA (5 mg/ml) significantly reduced beta cell replication compared to control already after 1 day and after 2 and 5 days expositions (Figure 3 B). The effect of MPA was dose-dependent and already significant at 1 mg/ml (Figure 3 C). 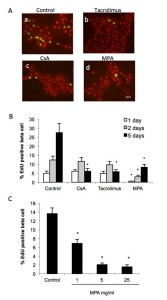 Figure 3. Immunosuppressive drugs inhibit beta cell proliferation. Islet cells were attached on culture dishes during 24h. Then cells were cultured for additional 1-5 days with EdU in presence or not of CsA, tacrolimus or MPA, at the concentration indicated. Cells were fixed and replication in beta cells was determined by EdU incorporation and PDX1 immnunofluorescence. A, fluorescence microscopic views of cells labelled for EdU (green) and PDX1 (red), bar = 20 μm. B-D, bar graphs showing the quantifications of EdU positive beta cells, mean ± SEM, n=3-5; *p < 0.05 vs. control.

Effect of Immunosuppressive Drugs on Beta-Cell Proliferation is Reversible

To test whether the inhibitory effects of immunosuppressive drugs on beta cell replication were reversible, islet cells exposed to the various immunosuppressive drugs for 2 or 5 days were cultured for another 3- or 6-day period under control conditions in presence of EdU. Removal of MPA from the culture for 3 days restored beta-cell proliferation to levels similar to control (Figure 4 A). For CsA and tacrolimus, beta-cell proliferation activity recovered within 6 days after drug removal (Figure 4 B). 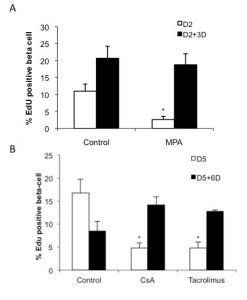 Figure 4. Effect of immunosuppressive drugs on beta cell proliferation is reversible. After attachment on culture dishes for 24h, islet cells were cultured in presence or absence of indicated immunosuppressive drugs (5 μg/ml MPA, 200 ng/ml CsA or 10 ng/ml tacrolimus) for 2 or 5 days. Then, cells were incubated in control medium with EdU for additional 3 or 6 days. Cells were fixed and replication in beta cells was determined by EdU incorporation and PDX1 immunofluorescence, mean ± SEM, n=3-5; *p < 0.05 vs. control.

In the present study, we show that the most commonly immunosuppressive drugs used in clinical islet transplantation inhibit pancreatic beta cell proliferation in vitro.

Although their chemical structure is different, CsA and tacrolimus both induce inhibition of the phosphatase activity of calcineurin 32. These data suggest that calcineurin plays an important role in beta cell proliferation and are consistent with previous studies demonstrating that calcineurin/NFAT signaling regulate pancreatic beta cell growth and function 33 , 34.

An antiproliferative effect of MMF was reported in human mesenchymal stem cells 35 and in cultured human fibroblasts 36. Most relevant to the current study, MMF has been shown to inhibit human pancreatic duct-cell proliferation 37 and DNA synthesis in pancreatic beta cell lines 38. These results also suggest that IMPDH, a rate-limiting enzyme in de novo synthesis of the purine guanosine triphosphate (GTP), and of which the two isoforms are expressed in islets 39, plays a central role in beta cell replication and maintenance of adequate islet mass.

These data were generated with rodent islets and it is legitimate to ask whether these observations are applicable to the human situation. Within the time frame of these experiments, we could not see evidence of endocrine cell proliferation in cultured human islets (data not shown). This has been a subject of debate, but it is admitted that human beta cell proliferation does occur at a lower turnover rate than in rodents, both in vivo and in vitro, possibly in relation to the extreme differences in lifespan 44. It has been also argued that, since this makes it unlikely to observe significant differences in proliferation studies using human islets in experiments with a reasonable time frame, studies performed with rodent islets are a valuable surrogate 45.

Taken together, our results suggest that progressive islet graft dysfunction may result in part from impairment of beta cell regeneration induced by immunosuppressive drugs in islet transplant recipients. These data also hint at the importance of developing alternative immunosuppressive regimens devoid of antiproliferative effects with the aim of preventing attrition of islet grafts.

Duality of Interest: All authors declare that there is no duality of interest associated with this manuscript.

We thank Corinne Sinigaglia for her excellent technical assistance.