Regenerative medicine aims at repairing damaged tissues using new cells. Different cell types have been proposed to this purpose with different advantages and limitations. Adult stem cells are well characterized but show a limited proliferation ability, differentiation potency, and are difficult to access. An alternative is represented by embryonic stem cells that display unlimited self-renewal and the ability to differentiate into all cell types of the body. However these cells are difficult to control and bring with them an increased risk of neoplastic transformation. More recently induced pluripotent stem cells have been proposed as a new promising technology. These cells, on the other hand, require the permanent integration of viral vectors into the host genome. This limits their possible use in regenerative medicine. A similar limitation accompanies the use of trans-differentiated cells, where reprogramming of a mature cell into another is obtained through viral transfections. We recently proposed a new strategy based on the direct conversion of an adult mature cell into another, avoiding the stable pluripotent state and the use of any gene transfection. This approach, designated “epigenetic conversion” is achieved through the use of an epigenetic modifier that drives the cells to a less committed and “high permissive” state and allows them to be re-addressed to a different lineage. We propose epigenetic conversion as a simple, direct and safe way to obtain cells to be used in cell therapy.

All cells in a multicellular organism contain the same genome. Nevertheless, they can adopt a specific fate and specialize in the several tissues that constitute the body. This is possible because each cell express different sets of genes which are responsible for a distinct phenotype. Cell commitment and differentiation occur without alteration in the sequence of DNA, but rather through modifications “on top of it”. These are defined as epigenetic modifications and are responsible of heritable changes that stably maintain the genomic region activity state. Two major mechanisms are involved in these regulatory processes: DNA methylation and histone modifications (Figure 1). The first consists in the addition of a methyl group to the cytosine or adenine DNA nucleotides. The other is characterized by the attachment of different molecules on the histone tail, allowing or preventing transcription factors and other proteins to access the DNA. 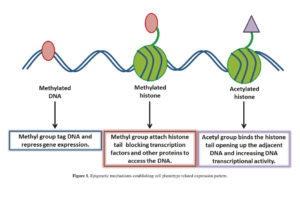 These differences in gene expression drive development and differentiation. In particular, mammalian development is characterized by a bimodal DNA methylation reprogramming that takes place during germ cell development, resetting parent-of-origin based genomic imprints and restoring totipotency to gametes, and then during the embryonic pre-implantation phase 1. This second phase of methylation reprogramming occurs between fertilization and the formation of the blastocyst, in the absence of transcription or DNA replication and it is known as “active de-methylation”. At the time of fertilization a rapid paternal-specific asymmetric loss of methylation is clearly visible, while the initiation of the de novo methylation starts at the time of the first differentiative event, namely at the time of the inner cell mass (ICM) and trophectoderm (TE) formation. The ICM, which gives rise to all the tissues of the adult, becomes hyper-methylated, while the TE, that forms most of the structure of the placenta, remains under-methylated 2 , 3. During the following developmental phases embryo/fetus cells undergo further specification process characterized by differential gene expression and epigenetic restrictions that gradually limit cell potency to a more limited phenotype-related expression pattern, producing highly specialized committed populations. A nice description of this concept was proposed by Conrad Hal Waddington 4 in his famous “epigenetic landscape”, a metaphor for biological development. In his landscape the embryonic cell is represented by a ball that rolls from a non-committed status (pluripotent status) down a hill marked by slopes and valleys that symbolize the many different and complex mechanisms involved in cell differentiation process. Rolling down, the ball is addressed, by slopes and valleys, towards a progressively more restricted potency pathway, down to a tissue specific differentiated state (unipotent status).

The acquisition of epigenetic marks culminates with the fixation of a specific lineage fate by differential DNA methylation, which has been considered stable and potentially irreversible for many years.

In particular, as we have discussed, mature cells acquire the differentiated state in an adult organisms through a gradual loss of differentiative potency 5 that leads to a progressive restriction in their options 6. This state, which is achieved and maintained through the epigenetic regulation of gene expression 7, is physiologically very stable and its complete reversal requires an extensive reprogramming process that makes it inefficient and prone to errors 8.

However, several recent studies have demonstrated that differentiation is a bi-directional process, since terminally differentiated cells can be forced back to an increased potency state. Using the Waddington’s landscape metaphor, the ball can be pushed from the bottom of the valley up to the top of the hill in counter-current direction. A clear application of this concept is represented by the induced pluripotent stem (iPS) cell technology (Figure 2).

However, this process requires levels of gene expression higher than those required once that state is reached, equivalent to an “activation energy” 9. This reflects the necessity to initiate epigenetic reprogramming events and is normally obtained through the use of retroviruses, integrated in the host genome to force over-expression of the four transcription factors needed to reach the pluripotent state, namely OCT4, KLF4, SOX2 and MYC 10 , 11 , 12 , 13. This results in the reactivation of endogenous genes, regaining a developmental potency akin to that of embryonic stem cells (ESCs).

It is fundamental to highlight that this approach suffers from a number of severe limitations that, in our opinion, prevent its possible use in regenerative medicine 14. The requirement of permanent viral vector integration into the host genome 15 , 16 and the low differentiation efficiency of iPSs, that rarely exceeds 30%, leaving mature cells mixed with undifferentiated ones 17, are associated with the risk of tumor formation. Furthermore, the acquisition of a stable pluripotent state is not physiological and appears to be difficult to control.

To by-pass this latter problem a new method, designated “trans-differentiation” has been introduced. This technique consists in the direct inter-conversion of one fully differentiated adult cell type into another without a pluripotent intermediate step. Several examples of this method have been described including the ability of the myogenic factor MyoD to reprogram different cell types to a myogenic phenotype 18 as well as the conversion of pancreatic cells to hepatocytes 19 , 20, B lymphocytes into macrophages 21, fibroblasts to neurons 22 or cardiomyocytes 23.

Unfortunately all these promising approaches do not solve the limitation related to the use of retroviral-mediated overexpression of one or more specific transcription factors 24, which, once again, makes cells unsuitable for cell therapy and regenerative medicine.

All these problems have stimulated the development of virus-free protocols for iPS derivation 25 , 26 but, at present, these are generally more technical demanding, less efficient 27 and do not solve the problems arising from the use of transgenes.

As discussed before, one of the limitations of reprogramming derive from the achievement of a stable and persistent pluripotent state. This condition is not physiological and does not occur during embryonic development, where pluripotency is limited to a short window of time 28.

We have recently developed an alternative protocol in order to convert an adult mature cells into another differentiated cell type, avoiding a stable pluripotent state and the related drawbacks 29 , 30. This new approach is based on the concept that, among the different mechanisms involved in lineage commitment and differentiation, DNA methylation plays a fundamental role, both during early embryonic development and cell lineage specification. Therefore, in line with this, we investigated and demonstrated that a short exposure to a demethylating agent can push cells to a less committed state and increase their plasticity. In order to induce this transient de-differentiated state in adult cells we selected 5-aza-cytidine (5-aza-CR), a well-characterized DNA methyltransferase inhibitor. This molecule is known to be a direct inhibitor of methyltransferase activity as well as of methylation in newly synthesized DNA. For its ability, it has been already used to alter gene expression and reactivate the transcription of previously silent genes 31 as well as to modify differentiation states and phenotypes of eukaryotic cells 32 , 33. Earlier studies showed, in fact, the possibility to obtain de-differentiation 34 of mouse fibroblast cells using 5-aza-CR 35, thanks to its capacity to remove the epigenetic “blocks” that are responsible of tissue specification.

In response to 5-aza-CR, adult cells present a short and transient high plasticity time window, which is temporary but sufficient to allow a direct conversion toward a different cell type (Figure 3). The results described have been accounted for the well characterized de-methylating effect of the compound. The experimental evidence in our hands point in this direction, however we think that other alternative mechanisms may be involved in this complex process and need to be further investigated. 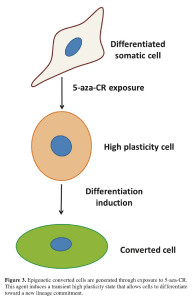 In response to 5-aza-CR, cell phenotype dramatically changes and is paralleled by a specific and consistent gene regulatory response, that highlights the acquisition of an increased plasticity.

Once cells are pushed into this “high permissive state”, they are able to respond to a differentiation protocol of choice. We used a series of inductions that mimic the developmental steps driving pancreatic cell differentiation during embryonic and fetal development.

The use of activin A for 6 days was able to push 5-aza-CR treated fibroblasts toward the endodermic lineage commitment. The subsequent stimulation with a combination of activin A and retinoic acid was able to drive the cells into the early pancreatic differentiation stage.

Phenotype modifications were evident at the morphological observation, within cells rearranging in a reticular pattern and forming clearly distinguishable aggregates. In line with this the progress along the endoderm/pancreatic lineage was demonstrated at the molecular level. In particular we could detect the expression of endoderm (SOX17, FOXA2) and primitive gut tube (HNF4) markers becoming evident along the process (Figure 4). Pancreatic differentiation was further encouraged with B27, basic fibroblast growth factor (bFGF), and insulin-transferrin selenium (ITS). Within 30 days, we could observe the formation of large 3D spherical structures that tended to detach and float freely in the culture medium.

Interestingly enough the newly acquired phenotype supported a profound and functional change in the converted cells. Changes in the culture environment, such as glucose stimulation, were able to trigger the active release of C-peptide and Insulin in cell supernatants after a short (1 h) or prolonged (24 h) exposure, showing a dynamic response similar to pancreatic beta cells, in which changes in ambient glucose represent the primary and physiological stimulus for insulin secretion. Converted cell functionality was also demonstrated in vivo after injection in immunodeficient SCID mice, whose β-cells had been selectively destroyed with streptozotocin. Their transplantation was indeed able to restore normal glycemic levels in these animals and to maintain those levels.

Based on the results summarized in this manuscript, we propose the possibility to obtain an efficient, controlled, homogeneous, and stable cellular inter-lineage conversion, encouraging a brief and reversible “high plasticity state”. We emphasize that this is obtained without the use of any gene transfection, it is free of viral vector and does not involve a stable pluripotent state.

Our experimental evidence demonstrate that we can convert a skin cell into one that produces pancreatic hormones in a simple and safe way. This clearly suggests a great potential of this approach for the treatment of diabetes. On the other hand, it is also evident that the combination of 5-aza-CR with different induction protocols may drive cells towards different tissue commitments, greatly expanding the possible use of epigenetic conversion within the regenerative medicine scenario.