INTRODUCTION: Cell-based therapies represent a promising therapeutic approach to enhance the regeneration of damaged tissue and the combination with specific soluble mediators and biomaterial scaffolds has allowed the introduction of new treatment strategies in regenerative medicine. Adipose-derived stem cells (ASCs) show the ability to differentiate into several cell lineages such as chondrocytes, osteoblasts, adipocytes, neuronal cells, and muscle cells. These cells are abundant in normal human fat and they can be easily harvested from small amount of liposuction. For these reasons, they are greatly employed in the treatment of cutaneous and musculoskeletal defects are greatly.

MATERIALS AND METHODS: ASCs isolated from liposuction aspirate by type I collagenases digestion were successively characterized by FACS analysis in order to verify their mesenchymal origin and test their capacity to differentiate into adipogenic, chondrogenic and osteogenic lineages. Autologous cultures of ASCs were finally resuspended in hyaluronic acid solution and used for the treatment of cutaneous manifestation in patients affected by systemic sclerosis (SSc) and more recently in another cutaneous alteration such as Parry-Romberg syndrome.

RESULTS AND DISCUSSION: Our very encouraging results shown a significant improvement in skin elasticity and recovery of some of the functions severely impaired in all patients treated. Therefore, we suggest that ADSCs might represent an important and reliable resource for the treatment of cutaneous defects of SSc. We believe that ADSC might be a successful therapeutic strategy especially for those diseases, such as Parry-Romberg syndrome, that have not yet successful treatments.

CONCLUSIONS: ASCs are an advantageous resource for regenerative medicine with the possibility to be employed in several treatments as we demonstrated in our study for SSc and Parry-Romberg syndrome.

The repair and regeneration of damaged tissues, have suggested the existence of stem cells in adult body. In particular, mesenchymal stem cells (MSCs) have raised interest for their therapeutic application in regenerative medicine. MSCs were discovered in the bone marrow by Friedenstein, who observed a cell population able to develop into fibroblast colony forming cells 1.The international society of cell therapy has defined MSCs on the basis of three criteria: MSCs must adhere on plastic when maintained in standard culture conditions, express CD105, CD73 and CD90, lack expression of CD45, CD34, CD14 or CD11b, CD79alpha or CD19 and HLA-DR surface molecules and differentiate into osteoblasts, adipocytes and chondroblasts in vitro. Moreover, MSCs are able to differentiate in nervous, muscular and endothelial cells 2 , 3, although they show several disadvantages such as the limited availability (0.01% of total nucleated cells) 4, and the pain and invasiveness of the sampling. Therefore, it has become necessary to identify other sources of MSCs such as adipose tissue, peripheral blood, umbilical cord and amniotic fluid. Adipose tissue represents an elective source of mesenchymal stem cells that can be easily isolated from stromal vascular fraction (SVF) obtained from a very small amount of liposuction aspirate. ASCs have the same stem-like phenotypic characteristics of MSCs 5 , 6 and they are able to differentiate into adipocytes, chondrocytes, osteoblasts, and myoblasts. Furthermore, ASCs show angiogenic properties and could also exert some immunomodulatory properties, including a suppressive response on collagen-reactive T-cells and the capacity to restore immune tolerance 7. Therefore, they may represent a promising approach to tissue engineering and regenerative medicine 8 , 9 , 10. In vivo studies on animal models have demonstrated anti-inflammatory and regenerative effects of non-expanded ASCs 11 , 12, thus suggesting its application in the treatment of Crohn’s Disease fistula 13 and multiple sclerosis 14. It is also possible to isolate and expand mesenchymal stem cells population from SVF, thus obtaining homogenous cell population and higher number of mesenchymal stem cells. These cells were employed in aesthetic and regenerative medicine combined with a soluble scaffold such as hyaluronic acid (HA) that provides a structural support and promote an adequate homing for growing cells. Moreover, several studies have previously demonstrated the in vitro compatibility of HA with tissue-resident and tissue-derived stem cells harvested from adipose tissue 15. Up to date, the clinical application of ASCs in regenerative medicine has not yet represented a consolidated therapy, although their effectiveness has been demonstrated in vitro and in animal models. Actually, there are several experimental studies indicating their possible use for the treatment of scarring, breast asymmetry, musculoskeletal disorders and vulvar dystrophies.

All experiments were conducted according to the principles expressed in the Declaration of Helsinki and approved by the Ethics Committee of the Azienda Policlinico Umberto I of Rome (Ref. 1834/25.03.10). Following the Institutional Guidelines, written informed consent was obtained from all patients prior to their inclusion in the study.

In our previous study 16, we treated six patients affected by SSc reaching good improvement. Therefore, we decide to extend the treatment to the other six patients, five females and one male. Moreover, we enrolled for the study two female patients affected by Parry-Romberg syndrome in order to ameliorate the cutaneous manifestation of this syndrome. All patients were subjected to liposuction and ASCs were isolated from lipoaspirate by type I collagenase digestion in PBS at 37°C for 30-60 min. After digestion we obtained the stromal-vascular fraction (SVF) that contains ASCs, through the centrifugation for 5 min at 2000 rpm. Cell pellets were resuspended in DMEM-Ham’s F-12 medium (vol/vol, 1:1) supplemented with 10% FBS, 100 U/ml penicillin, 100 μg/ml streptomycin and 2 mM L-glutamine, and plated in a 75 cm2 tissue culture flask coated with collagen. ASCs were self-selected out of the SVF, based on their adherent phenotype, during subsequent tissue culture passages and maintained in a humidified atmosphere with 5% CO2 incubator at 37°C. Growth kinetics was performed on ASCs from healthy control, sclerodermic and Parry-Romberg patients. At several time points (days 3, 6, 9 and 12) after seeding, cells from three duplicate wells were harvested and counted. Non-viable cells were excluded by using the trypan blue assay. Then ASCs were characterized to verify the capability to differentiate in adipogenic, chondrogenic and osteogenic lineage as previously described 17. The cells were resuspended in adequate volume of hyaluronic acidic solution at a concentration of 8 • 105 cells/ml and loaded in syringe.

SSc is a rare disease with unclear aetiopathogenesis, involving genetic and environmental factors 18. It was characterized by chronic trend, wich typically results in fibrosis of the skin and internal organ due to the accumulation of type I collagen in the extracellular matrix 19. Cutaneous manifestations are often related to loss of elasticity, tightness of the skin that leads in sclerodactyly, digital ulcers resulting in atrophy and eventual amputation. Patients affected by SSc showed a typical facial features that include teleangiectasias, microcheily, shrunken nose, micostomy and microglossy. Other skin manifestations include hair loss, skin pigmentation, dryness and joint contracture 20 , 21. Up to date, there are no still successful treatments available for cutaneous defects of SSc. In fact the current therapeutic approaches as dermal fat graft 22, collagen or synthetic materials injection 23 , 24, local and free flaps 25 have shown severe disadvantages. Lipofilling is routinely used to treat these patients without a real evaluation of measurable loss in volume, vitality and differentiation potency, migration and homing characteristics. Fat transplantation became the first therapeutic choice for the treatment of cutaneous manifestation of sclerosis 26; this technique uses the patient’s fat as natural filler, although several studies have demonstrated that free adipose tissue is frequently absorbed or replaced by fibrous tissue 27. To overcome this flaw, in our study we have rather preferred to isolate ASCs from SVF in order to obtain an enriched and homogenous cell population. Therefore, autologous expanded ASCs were processed in accordance with Good Manufacturing Practices (GMP) at the laboratories of Sapienza University of Rome, before being delivered in HA acid and locally injected in patients affected by SSc 28. After the clinical trial was approved by Ethics Committee, six patients, four females and two males, were enrolled for this study. ASCs were isolated, from liposuction aspirate, by type I collagenases digestion (Figure 1) and successively characterized by FACS analysis to verify their mesenchymal origin. 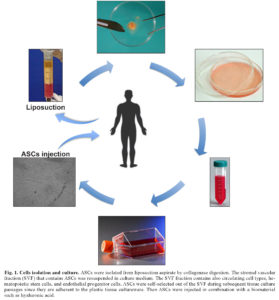 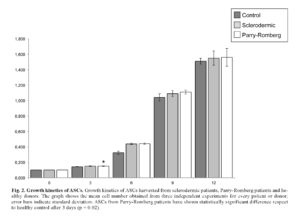 Then we tested ASCs differentiation capacity in adipogenic, chondrogenic and osteogenic lineage (Figure 3). 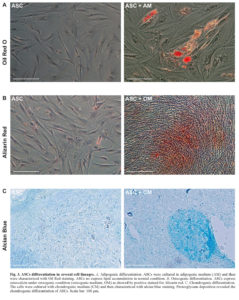 Finally, ASCs were resuspended in stabilized Hyaluronic Acid (HA) solution and loaded into an injection syringe. All patients showed improvement in symptomatology and amelioration of progression of cutaneous manifestation, increase of subcutaneous thickness and regular skin structure; both patients and dermatologist were satisfied with the results. The observed therapeutic effects of this treatment might be related to immunomodulatory and anti-inflammatory effect of ASCs, together with the capability of ASCs to locally differentiate in adipocytes giving the volume to the treated skin and preventing further damages. In light of these considerations, we decided to extend the cohort to other SSc patients for a total of 12 patients (Table 1) demonstrating a significant improvement of the treated area in all of them. 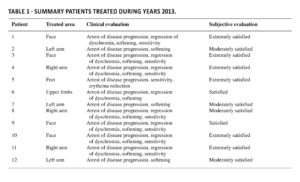 ASC-based cell therapies represent a satisfactory opportunity in regenerative medicine for the treatment of skin diseases. Our findings suggested the possibility to extend this technique to other diseases characterized by cutaneous manifestation, such as Parry-Romberg syndrome. This syndrome is a rare disorder characterized by progressing facial atrophy, which may affect the skin, fat, muscle and bone. It can also be associated with different systemic manifestations and deformities. This syndrome is treated with microvascular free flap and microfat grafting. The first technique has several disadvantages such as the risk of facial nerve injury and long operation time. Also microfat grafting technique presents several limits especially the sagging deformity in the long term 29. Therefore, we supposed that the treatment of Parry-Romberg syndrome with ASCs-based cell therapy might give the same improvements that we observed in sclerodermic patients. We treated two Parry-Romberg patients with the same protocol used for SSc patients and preliminary results suggested improvement in wellness of the skin in both patients. In order to confirm our results, it is however necessary to wait for the estimated time of follow up. Therefore, we plan to widen ASC-based cell therapy for the treatment of cutaneous manifestation of Parry-Romberg syndrome.

This study assesses the efficacy of ASCs treatment for cutaneous manifestation in particular in sclerodermic patients. The technique that we adopted has showed significantly improvement in all treated patients whit arrest of local disease progression. Furthermore, the limited treatment options for this syndrome could encourage the introduction of ASCs as possible cell therapy for SSC as well as for patients with similar disabling diseases.