INTRODUCTION: No cure has been found for Amyotrophic Lateral Sclerosis (ALS) despite several studies using drugs or related compounds.

BACKGROUND: Cellular, molecular and preclinical studies have suggested that the use of Mesenchymal Stem Cells (MSC) may represent a therapeutic option for ALS treatment. MSC exhibit a capability for self-renewal, differentiation (mesoderm and neuroectoderm phenotypes) and production/release of neuroprotective mediators.  All these attributes epitomize an option for using MSC in ALS.

RESULTS: Physical examination, vital signs, CBC and Chemistry Panel indicated no significant clinical effect (s) of the cell product infusion.  Additionally, no evidence of adverse events/side effects was detected during a period of 18 months after cell infusion.  Quantitative clinical assessments (forced vital capacity, hand held dynamometry and functional rating scale) at baseline and different time intervals after cell infusion revealed no evidence of acceleration, but a generalized delay in the progression of the disease.

DISCUSSION: This data demonstrated that infusion of allogeneic MSC to an ALS patient was safe and feasible. Of main importance is the observation that even after 18 months of cell infusion, the patient has recognized a significant, stable and remarkable repossession of quality of life.

CONCLUSIONS: These results strongly suggest that the use of allogeneic MSC represents a safe and effective therapeutic option for ALS.

Amyotrophic lateral sclerosis (ALS), commonly known as Lou Gehrig’s disease, is a chronic progressive neurodegenerative disease that attacks motor neurons in the brain (upper motor neurons) and spinal cord (lower motor neurons). ALS affects over 350,000 of the world’s population, and kills over 100,000 every year.  It is commonly mentioned that ALS has no prejudice, since it occurs worldwide, with no age, ethnic or economic considerations.  Despite several studies to assess effectiveness of drugs or related compounds on ALS and/or related conditions, no cure has been found for ALS 1 , 2. Knowledge transpired from cellular, molecular and preclinical studies have put forward the notion that certain types of stem/progenitor cells may possibly contribute to repair and/or delay the disease-associated damage taking place in ALS or related conditions.

Mesenchymal stem cells (MSC) represent a type of adult stem cells that exhibit several features that epitomize an attractive option for treating central nervous system injuries, including ALS and traumatic spinal cord injury 3 , 4.  Among these attributes the following are pertinent: a) capability for self-renewal, commitment and differentiation into several mesoderm and neuroectoderm phenotypes, b) production and release of a vast repertoire of “cell mediators” involved in the fine-tuning of distinct cellular microenvironments (neuroprotection), c) privileged immunophenotype capable of regulate immune responses and d) capability to manage oxidative stress 5.  The first report dealing with the use of adult stem cells in ALS patients, described that the dorsal spinal cord implantation of autologous bone marrow-derived MSC was safe, well tolerated and promising 6.  In a recent report, the   same group emphasizes the necessity of better recruitment and selection of patients to test efficacy after the infusion of autologous MSC to ALS patients 7.

Based on this information, as well as in additional evidence supporting the concept of a “cellular and molecular neurological trait” of MSC, an IND was submitted and approved by the FDA, USA 8. This phase I study was designed to assess the safety and feasibility of the intrathecal infusion of minimally manipulated ex vivo expanded autologous bone marrow-derived MSC, as shown by pre-clinical studies 9.

Description of the case

The  patient  a 62-year-old Caucasian man was included in this study 10 because of the progressive nature of ALS  symptoms with no subjective or objective signs of decrease in the intensity of his muscular weakness or disability (Table 1, A and Figure 1, follow-up month 0). 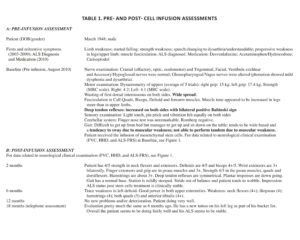 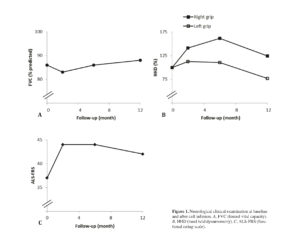 After fulfillment of the IND’s inclusion/exclusion criteria 11, bone marrow aspiration was performed as the source of autologous MSC. The aspirate was sent to the GMP facility for isolation and ex-vivo expansion of “native” MSC.  Once in culture, the microscopic observation of vessel-attached cells revealed the presence of few MSC-like cells (CFU-F) and abundant cells with the distinctive morphology of precursors/mature osteoclasts, consistent with previous observations 12. Since, after several medium changes, cultures contained mostly precursors/mature osteoclasts and non-proliferating MSCs (day 25 of ‘extended’ culture), the expansion attempt was discontinued.  The patient was designated as a treatment failure and after 2 months, a second unsuccessful attempt to grow and expand bone marrow-derived MSC was initiated.  According to protocol guidelines, the patient was withdrawn from the clinical study.

Based on the severity of ALS condition, the patient was treated with allogeneic MSC instead of autologous MSC, as the cell product to be infused. Allogeneic MSC, due to a distinctive immunophenotype, has been proven to be safe in animal and human studies.  In the last case,allogeneic MSC have been safely transferred by diverse routes without eliciting immunologic reactions and/or side effects 13.

Study Outcomes, Preparation and infusion of the allogeneic cell product.

Despite the caring and novel features of this study, the primary outcome was to assess the safety of the cell product infusion procedure, as assessed by absence of complications at the site of infusion and/or the appearance of new neurologic deficit/s not attributed to the natural progression of the disease.  In turn, secondary outcomes were started to evaluate at different times after cell infusion, neurological changes in forced vital capacity (FVC), ALS functional rating scale scores (ALS-FRS) and hand held dynamometry (HHD).

Eligibility of a bone marrow donor was based on screening and testing for communicable diseases, as recommended (FDA; 21CFR 1271.75, 1271.80, 1271.85).  For preparation of the donor cell product, bone marrow-derived MSC were ex vivo expanded following published procedures 14 , 15. Shortly after initiation of cell expansion, it was observed that MSC proliferated as the unique population of attached cells, which after two passages were released from the culture vessels, suspended in infusion medium (DPBS containing 0.05 % human serum albumin) and prepared for infusion (‘cell product’).

Aliquots of the cell product were prepared for lot release criteria tests (USP Sterility, Endotoxin, Mycoplasma, Viability and Gram’s stain) and for immunophenotype identification. The expanded population of MSC expressed (≥ 98 %) antigens CD73, CD90 and CD105 but not CD45 and CD34.  After fulfillment of the lot-release criteria, the cell product was delivered for patient’s infusion.

After sedation medication, the cell product (0.6 x 106 MSC/kg body weight in 4 ml infusion media) was delivered to the lumbar intrathecal space (L3/4 level) by using a spinal needle under fluoroscopic guidance over a period of 6 minutes.  After the infusion procedure, the patient was placed supine in Trendelenburg position for 1 h and then flat for another hour.  Vital signs and access site were monitored for a period of 48 h.  In turn, neurological clinical examination for a period up to 12 months was performed at TCA Cellular Therapy and at patient’s County ALS Clinic (Our Lady of Lourdes Hospital, Lafayette, LA, USA).

Physical examination, vital signs, CBC and Chemistry Panel were performed at baseline and at week 2 and month 1, 6 and 12 post-cell infusion.  The results of these evaluations indicated no significant clinical effect (s) after the infusion of the allogeneic stem cell product.  Similarly, no adverse events or side effects were detected during a period of 12 months after cell infusion.

It is important to mention that in addition to the above evaluations, nerve conduction studies (lower and upper limbs) were also performed pre- and post- cell infusion (month 1, 2 and 6).  As nerve conduction profiles at baseline revealed no significant alterations, alike results after cell infusion are not presented.

The data here presented demonstrated that the intrathecal infusion of a cell product containing allogeneic ex-vivo expanded bone marrow-derived MSC to an ALS patient was feasible, safe and do not eliciting infusion-related adverse effects.

Infusion of the cell product was also effective as established by the clinical assessments performed shortly after infusion and during a 12 month follow-up period.  As seen in Figure 1, Forced Vital Capacity (Figure 1 A) was kept rather constant during the entire follow up period.  In turn, ALS-FRS score (Figure 1 C) exhibited an early improvement which was maintained relatively constant during the 12 months follow up.  In the case of HHD (%) values (Figure 1, B), shortly after stem cells infusion a transient improvement in right and left grip HHD was observed. While right grip values kept always higher than those at baseline, a time-dependent decreased of left grip values was observed.

All together, these data suggest that the infusion of allogeneic MSC produces in the patient a slowdown in disease progression as well as important survival benefits 16 , 17 , 18.

Of main importance is the observation that even after 18 months of infusion of allogeneic MSC, the patient (telephone assessment) has recognized a significant, stable and remarkable repossession of quality of life.

Concurrently, the results presented in this study as well as those reported in a previous study showing functional deficiencies in MSC obtained from ALS patients 19, strongly suggest that the infusion of allogeneic MSC represents a safe and effective alternative for the treatment of ALS.

The results described in this case report as well as in other studies published in the last two years 20 , 21 , 22, strongly put forward the notion that stem cells treatment could be a helpful therapeutic approach for ALS. Given the catastrophic nature of this disease and its great variability, these encouraging results embody not only a promising therapy but a strong reinforcement to “the principle of hope of patients that had no illusions of a panacea” 23.

We are aware that the biomedical community as well as ALS organizations and patients will follow with interest the progress of Clinical Protocol IND 13729 24, which provided the guidelines to threat the patient here described.  This clinical study, which received from the FDA an Orphan Drug Designation (December 2010), was the first in the USA to utilize a non-invasive procedure to infuse adult and not laboratory differentiated stem cells to ALS patients.

Written informed consent was obtained from the patient for publication of this case report and for release of the Patient’s Progress Report, as obtained by the patient from the County ALS Clinic (Our Lady of Lourdes Hospital, Lafayette, LA, USA).  Copies of both consents are available for review by the Editor-in-Chief of the Journal.